If you haven’t already heard of the New Castle, Delaware-based cover band Face Down, you soon will. Face Down combines the raw attitude of hard rock with the sound and style of classic rock. During their performances, these four guys, all veterans of the mid-Atlantic music scene, play a generous mix of radio hits plus they cover some deeper album cuts too.

With approximately 60 songs in their repertoire, Face Down plays classic tunes from legendary hard rock bands such as Aerosmith, Black Sabbath, Dio, Iron Maiden, Led Zeppelin, Stone Temple Pilots, Van Halen and ZZ Top. Additionally, Face Down branches out beyond classic rock, covering bands like Alice in Chains, Audioslave, Buck Cherry, Bush, Cake, Foo Fighters, Fuel, Green Day, and Seether. Content on not being just another bar band, Face Down’s live shows are symbolic of a party atmosphere on the stage and their high energy and enthusiasm spills out into the audience.

In this edition of The Creative Spotlight, I had the pleasure of interviewing Rich Durkin, Mike Janocha, Paul Janocha, and Damien Janocha from Face Down and asking them a few questions about their musical influences, their career as a cover band, their set list, and their past and upcoming performances.

The Creative Spotlight: How did you come up with the band name Face Down?

Damien: We were hanging out at a Buffalo Wild Wings and we were trying to come up with a name. We had about three different names, and it was kind of comical because we had talked to the waitress that came to our table. We asked her, “just judging by the three band names you see here, which one would you come to see?” She actually liked the name “Face Down.” And we were kind of partial to it and joked about it for a while. It really doesn’t have a meaning. Some people think there is, and it’s kind of comical what their take might be on it.

TCS: Can you introduce us to the Face Down band lineup?

TCS: How long has this current lineup of Face Down been playing together?

Rich: The current lineup of Face Down has been together for a little over a year, however the three brothers, Mike, Paul, and Damien, have been playing together most of their lives.

TCS: At what age did you guys individually realize that you wanted to be musicians?

Paul: We come from a very musical family so it’s always been in our blood.

TCS: As a cover band, how would you describe Face Down’s musical genre and where do you play most of your gigs?

Mike: We play a mix of modern hard rock and classics throughout Delaware and surrounding areas.

TCS: As a band what famous musicians do each of you admire and how have they influenced you individually and collectively?

Paul: Dave Grohl, the lead vocalist, guitarist, main songwriter and founder of the band Foo Fighters. He’s a killer drummer, awesome guitar player, great vocalist, and an amazing songwriter and showman! He’s true to his art and makes his records his way (the rest of band nods in agreement).

TCS: During your appearances which cover songs do you perform most frequently? And, what songs would someone be surprised that you play regularly?

Damien: We have over sixty plus songs in our set list and we’re constantly adding more. We’ll typically play some Foo Fighters, Van Halen, Stone Temple Pilots, and then throw the audience a curve by playing something like “Good Girls Don’t” by The Knack.

TCS: How would you describe the local music scene in DE and surrounding area? And, how has it helped you collectively develop as artists?

Paul: The downturn in the economy has negatively impacted the number of venues that are willing to pay for quality entertainment so we work extra hard to put on a good show for our audience.

TCS: Music fans have a burning desire to be entertained when they go out. Do you think your band lives up to their expectations and why?

Rich: Yes. We’re having a blast playing music we love so our enthusiasm spills out into the crowd.

TCS: As a collective group, what has been the toughest challenge you’ve faced to date, and do you think it made you stronger as performers?

Mike: We’ve gone through a recent lineup change so we’ve had to step up our game. Absolutely, it’s made us stronger.

TCS: What is your preparation strategy as far as getting ready on gig night?

TCS: What’s the most unusual place Face Down has ever played a gig? And, how did the qualities of that place affect the show?

Rich: A couple of weeks ago we played a wedding. You don’t hear Black Sabbath’s “War Pigs” or Iron Maiden’s “The Trooper” played at most receptions!

TCS: Equally, is there a particular venue that Face Down enjoys playing? And, perhaps maybe a venue that you’ve always wanted to play and haven’t yet?

Damien: We always enjoy playing at JB McGinnes in New Castle, DE! It’s our hometown and we always have a great crowd. We would love to one day play at the Bottle & Cork in Dewey Beach, DE.

TCS: How do you market Face Down’s appearances, music, videos, and photos?

Paul: Shameless self-promotion! We promote ourselves heavily through social media, FaceBook in particular. We are also sure to put our calendar out at each gig and put up posters in the venues well in advance of the show. Of course, we mention our Face Down website (shown below) every chance that we get. Additionally, fans can also visit our ReverbNation site too.

Wondering where and when you can catch Face Down live? There’s an app for that! In early 2013, Face Down launched a Mobile App for Android. With this free Mobile App, you can listen to music, check out photos and videos, read blog posts, and get exclusive push notifications straight to your mobile device. To download the Mobile App today, please go to www.reverbnation.com/facedownrockband/app. 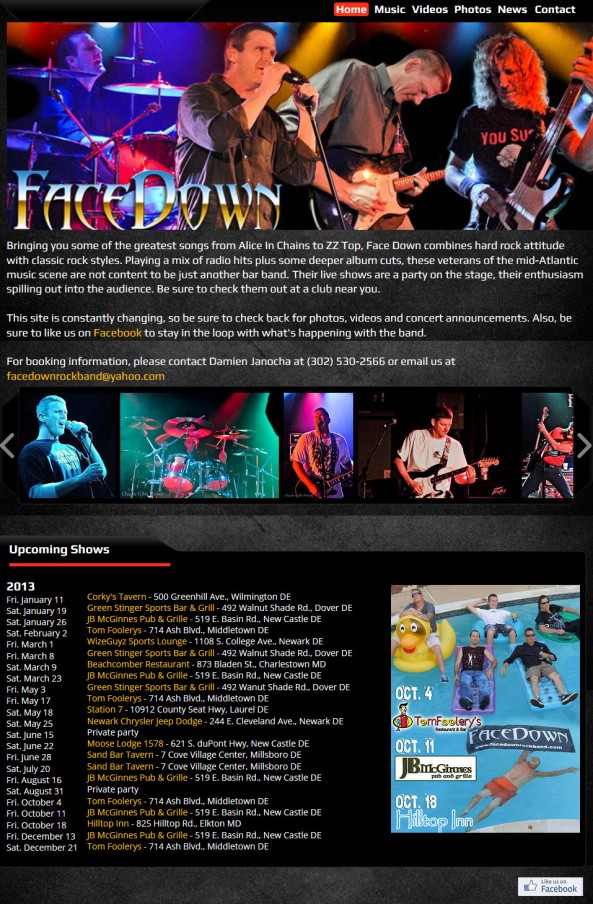 TCS: Tell us about Face Down’s recent June and July appearances at the Sand Bar Tavern in Millsboro DE?

Mike: We love to play the Sand Bar Tavern! The crowd’s been great both times we played. We can’t wait to play there again next summer!

TCS: Share with us some details about your upcoming performance on Friday, December 13th at JB McGinnes Pub & Grille in New Castle, DE?

Damien: We’re really looking forward to playing at JB McGinnes Pub & Grille in December! This will be the debut of our new lineup. The club always has great sound and lighting.

TCS: How did you land the performance on Saturday, December 21st at Tom Foolery’s in Middletown, DE?

Mike: Paul’s put together a very professional press kit which makes it easy for Damien to do the booking. We’ve played Tom Foolery’s a number of times. We bring in a good crowd, the staff always gives us a positive response and they keep asking us back.

TCS: Describe with us what your rehearsals are generally like? Do you have a set time each week in which you practice or are rehearsals more spontaneous?

Rich: We practice a few hours every week. Everyone does their homework so it makes for productive rehearsals.

TCS: What’s does the short-term and long-term future hold for Face Down?

TCS: What advice do you have for young bands trying to get established?