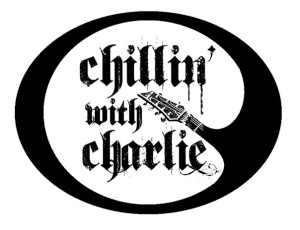 Essentially, if it rocks hard, Chillin’ with Charlie wants to play it LOUD! Their playlist consists of everything from Aretha Franklin to Halestorm, from Katy Perry to ZZ Top… and everything in the middle… even a little Johnny Cash! Content on not being just another cover band, Chillin’ with Charlie is definitely NOT your typical cover band playing the same old tired songs. If you’ve heard it a million times, they aren’t looking to make it a million and one.

In this edition of The Creative Spotlight, I had the pleasure of interviewing Meeta Parker, Steve Bannan, Bobby Doney, Jim Cluster, and Greg Alkins from Chillin’ with Charlie and asking them a few questions about their musical influences, their career as a cover band, their set list, and their past and upcoming performances.

TCS: How did you come up with the band name Chillin’ with Charlie?

CWC: Well we were jamming down the basement one night and my dog Charlie was always a part hanging out running around sitting listing to us play this went on twice a week till today he loves the band he waits for them to come over and just hang with them so that’s how we came up with Chillin’ with Charlie.

TCS: As a cover band, how would you describe Chillin’ with Charlie’s musical genre?

We lucked out because Meeta’s Husband Frank Parker turned out to be an Audio Engineer / Sound Man so he became an asset to our band. He puts it together and makes it tight. We are lucky to have him apart of the Chillin’ w/ Charlie family.

TCS: Can you introduce us to the Chillin’ with Charlie band lineup?

CWC: The Chillin’ with Charlie band lineup consists of the following (as shown in pic above):

TCS: How long has this current lineup of Chillin’ with Charlie been playing together and how did you all get started?

Greg: Chillin’ with Charlie has been around for 3 years. I wanted to start a band up so I put it out on social media, BandMix, and Craigslist. With that, I found the best of the best and here we are.

TCS: At what age did you guys individually realize that you wanted to be musicians?

TCS: As a band what famous musicians do each of you admire and how have they influenced you individually and collectively?

TCS: Why do you think cover bands have become so prominent in the past 10-15 years or so?

CWC: Brings back those good old memories and good time of great music to dance get together with friends and just rock out We know people want the excitement of live music, but they want to have a good time together dancing and hanging out with friends with songs they know and love.

TCS: How would you describe the local music scene? And, how has it helped you collectively develop as artists?

This has helped us pick and choose music that is different that no one else is playing and that you don’t hear all the time. This gives us an incentive to mix up the music to make Chillin’ with Charlie the best we can be. There’s a lot of mutual respect, support, and admiration. It’s great to support each other, and we can always be challenged and learn from the others out there.

TCS: How do you market Chillin’ with Charlie songs, merchandise, and appearances?

CWC: We do most of our promoting on our band Facebook page and we print up flyers and posters to put up in clubs that we play in. We also sell T-Shirts with our band name and logo.

TCS: On your website, tell us what your fans can do or learn about Chillin’ with Charlie?

CWC: On our band website and Facebook page, you can find our band schedule, view videos of us performing, and see pictures of gigs we’ve played in the past.

Stay connected to Chillin’ with Charlie at the following:

TCS: During your shows do you ever play any originals? Which cover songs do you perform most frequently? Do you have a set play list?

CWC: No, during our shows we do not play any originals. Our playlist consists of bands like Heart, Pink, and Journey. We change the set play list depending on the crowd and the venue. We take great pride in the diversity of our play list. We play all covers, from today’s pop, to Motown classics, to hard rock, and classic rock favorites.

Bobby Doney: We have a bunch of Joan Jett and Pat Benatar tunes as well, that’s because we’re boss.

TCS: Tell us about Chillin’ with Charlie’s recent appearance at Tipsy McTullio’s Pub in Claymont, Delaware?

CWC: Great crowd, turnout, and response, promo was flyers, Facebook and word of mouth. Our following is continuously growing. Tipsy’s was a GREAT local venue, with a built-in, supportive crowd that was very receptive to us. We promoted the event with flyers at the venue, and online postings on Facebook and a number of other sites.

Tipsy’s (both shows) was the perfect mix of our crowd and a built-in crowd. We were proud that on our second appearance there, they named a drink after us for the night. Their ‘Jungle Juice’ shooter became ‘Charlie’s Chiller’ that night. We were terribly sorry when Tipsy’s closed. It was a great venue, strongly supportive of local music, and its North Wilmington, DE location was perfect for a lot of our fans.

CWC: Below, find our set lists and who sang the song:

TCS: How did you land the performances at Cunningham’s Irish Pub in Newark, Delaware in June and July 2013? And, how would you describe the crowd and your playlist like?

CWC: We landed that event through word of mouth on Facebook, and we mostly played the same play list with a few changes. Cunningham’s Irish Pub is another great local place, and a strong supporter of local music. Again, we were able to bring our crowd together with their built-in crowd, and get them all dancing together.

TCS: Share with us some details about your performance on Saturday, June 15th, at the 3rd Annual Laxpalooza Lacrosse Tourney at Bicentennial Park in Bethlehem, Pennsylvania?

CWC: The Laxpalooza Lacrosse Tourney was an outside event that we got through a friend of ours. It was a great crowd / different crowd young and old fun show to play and hot. The play list was changed due to the age.

Bobby Donney: It was awesome to have this giant field as the dance floor.

TCS: Tell us how excited you guys were to have played Cheney’s on the Pike in Wilmington, DE?

CWC: Yes, very excited. We’re looking forward to playing there again in both November and December. Cheney’s is a great place to play and they’ve had us in a number of times. They have good people and a good crowd. We have probably played there more than any other place. They are another great supporter of local live music. Nearly every local musician has played there at one time or another in their career, and they are another great supporter of local music.

TCS: What songs would someone be surprised that you play regularly in your playlist?

CWC: A couple of examples would be “Holy Diver” from Dio and “Man In The Box” by Led Zeppelin. We’re very diverse we can mostly play anything. We try to not only be diverse in the songs we play, but in the versions we select. For example, we play “Call Me” by Blondie, but we play the version recorded by hard rock band In this Moment. The hope is to appeal to a much wider potential audience, surprise the crowd as much as we can, while still keeping them dancing.

Bobby Donney: We also played a great tune by Metallica which I love called “My Friend of Misery” but we don’t have a metal head following.”

TCS: What’s the most unusual place Chillin’ with Charlie have ever played a gig? And, how did the qualities of that place affect the show?

CWC: We recently played Aqual Sol restaurant in Bear, Delaware. We started out playing outside on patio with the dinner crowed and they were very quiet. Then, we changed the music set to accommodate the crowd as the night went on. We started to rock it up with dancing and jamming out to classic rock. We also did the Ice Bucket Challenge to raise $150.00 for ALS (Amyotrophic Lateral Sclerosis often referred to as “Lou Gehrig’s Disease). The patio at Aqua Sol on the Saturday of Labor Day weekend was a unique show. Aqua Sol has a beautiful location, just off the water and marina at the C&D Canal.

As previously mentioned, the Laxpalooza Lacrosse Tourney was another unique show, and our first together with that lineup. Due to its distance from home, it was difficult to draw our crowd, but we had a great crowd of youth lacrosse players, parents, coaches, and event staff. While we’re not Katy Perry fans that was the show where we learned the power of Perry to get people dancing (unfortunately, most of our dancers on that song won’t be of age to see us again for a few years.)

TCS: Describe with us what your rehearsals are generally like? Do you have a set time each week in which you practice or are rehearsals more spontaneous?

CWC: We usually practice on Tuesday nights. Sometimes we pick some new songs, drink lots of beer, hang out with Charlie, and have a great time jamming with the band.

TCS: What’s does the short-term and long-term future hold for Chillin’ with Charlie?

CWC: For Chillin’ with Charlie there is no short-term we are only looking at long-term. We have something special going on with our energy, our drive, and our passion for music not only as a band but as a second family. We are looking to play bigger venues like XFINITY Live!, Pennypack Park Music Festival both in Philadelphia, Pennsylvania, and so on….

TCS: Meeta can you tell us about the children’s book entitled Cookie the Clown that you published back in July of 2007?

Meeta Parker: I worked as a clown for 4 years of my life and children used to ask me if I was a real clown, I used to tell them that I was and it eventually led to the ideas that I wrote into my book, Cookie the Clown.

The book is about real clowns that come into our world from their own country and begin living among us, basically as minorities. Something I also have a lot of experience with as my family is from India.

TCS: Are Chillin’ with Charlie working on anything right now?

CWC: We are always working / fooling around with new things to improve our overall set list.

Bobby Donney: Songs like ‘Pride and Joy” by Stevie Ray Vaughan, “Old Time Rock and Roll” by Bob Seger, and for the others you have to come out and rock with us.

TCS: What advice do you have for young bands trying to get established?

CWC: Follow your passion with your heart and stay true to what you love and work hard. Go out to see as much live music as you can, in whatever style you choose to play, and talk to the musicians. It is a supportive community. We have talked to and learned from others, and are always happy to encourage the next up and coming group.

One comment on “Chillin’ with Charlie: Rock Cover Band”