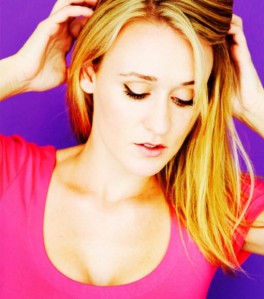 Ashley Dulaney is an American born actress who was born in Tupelo, Mississippi, the hometown of “the King of Rock and Roll” Elvis Presley. From a very young age, Ashley always knew that she wanted to be an actor. To that extent, she attended the University of Mississippi in Oxford, MS and graduated with a Bachelor of Fine Arts in Acting.

During Ashley’s “Ole Miss” career, she garnered roles in university theatre productions such as 5 Women Wearing the Same Dress, Cyrano de Bergerac, and Lysistrata. Post-graduation, she moved straight to Los Angeles, California and continued to perform in the theatre which ultimately lead to roles in commercials and television.

In 2012, Ashley appeared in the TV series Frat House Musical, one of the first projects that she booked when she arrived in LA, as Erica.  The series was sponsored by Subway and won a student Emmy. Later that same year, she was worked with Joan and Melissa Rivers in a Turbo Tax commercial. She is best known for playing Harper in Babysitter’s Black Book (2015) and Rebecca in The House Sitter (2015). Additionally, she has guest starred on some amazing shows like Scandal, Criminal Minds, Brooklyn 99, Chasing Life, WorkAholics, Bones, Stitchers, and a recurring role as Caprice on the last season of FX’s Justified.

In this edition of The Creative Spotlight, I had the pleasure of interviewing Ashley Dulaney and asking her a few questions about what first got her interested in acting, her career as an actress, her experience in working with Joan and Melissa Rivers, her roles in two 2015 Lifetime movies, and her upcoming projects.

The Creative Spotlight: At what age did you become interested in becoming an actress? And, who or what inspired you to pursue a career in this profession?

Ashley Dulaney: I think I’ve always known I wanted to be an actor. I don’t know that it was one single person or moment that really solidified that this was what I wanted to do for the rest of my life. It was more I just loved playing. I loved using my imagination and I was always connected to the arts and being on stage or performing just made me really happy.

TCS: For the benefit of those who may not be too familiar with Ashley Dulaney or your overall body of work, please describe for us your career at a glance?

AD: I grew up in the south and got my Bachelor of Fine Arts (BFA) in Acting from the University of Mississippi (Ole Miss) and moved straight to Los Angeles, California right after college. I started working in Theatre right away and that lead to commercials and television. I’ve been blessed enough to work with Lifetime twice in 2015 (Babysitter’s Black Book and The House Sitter). I’ve guest spotted on some amazing shows like Scandal, Criminal Minds, Brooklyn 99, Chasing Life, WorkAholics, Stitchers, and I had a recurring role on the last season of Justified.

TCS: Can you give us three “Good to Know” facts about you?

TCS: How did you prepare for your role as Harper in Lee Friedlander’s 2015 Drama Babysitter’s Black Book?

AD: Playing Harper in Babysitter’s Black Book was a lot of fun. It’s always a blast getting to play “the mean girl”. When I prep for any character I really try to place myself in that situation so that when I’m working all of my actions are coming from an honest and vulnerable place. None of us like to be mean but we’ve all felt jealousy and anger, which Harper pretty much stayed in, so I tapped in to that. It just allows the character to be real in that moment.

TCS: Describe for us your experience in playing Rebecca in Jim Issa’s 2015 Creepy Thriller entitled The House Sitter?

AD: Rebecca was a dream role. It was by far the most emotionally draining character I’ve ever gotten to play which in itself is a gift. Rebecca is so twisted and broken, so as an actor when you’re given the chance to play such an intense character everyday it is like being on the playground. She is a character with a lot of twists and turns. It’s also a cool experience to tap into such extreme emotions. It was just a blessing to be a part of that project.

TCS: How much fun did you have playing Erica in the Comedy, Musical Frat House Musical in 2013?

AD: Frat House was actually one of the first projects that I booked in LA. It was sponsored by Subway and was just so creative and fun. It ended up being selected and won a student Emmy, which is always really fun.

TCS: Can you tell us a little bit about how you landed the role in the TV commercial for Turbo Tax?

AD: Working with Joan and Melissa Rivers on Turbo Tax was such a surreal experience. I went to audition for the commercial and casting actually had me talk about someone I would love to meet, and I brought up Joan Rivers and how I would love for her to just destroy my style on Fashion Police. I don’t remember if they were already planning to do the commercial or how it came about but I was so shocked when I heard I booked it and I was going to get to act opposite them. It was my first acting job in LA and to get work with such a legend was insane. They were both so kind and gracious, not to mention insanely feisty. I just loved it.

TCS: What is your favorite film of all time? And, how has this film influenced your acting career?

AD: That is a really hard question for me because I have so many favorite movies… If I was going classic movie I would say The Princess Bride. But if I was going on something that had really influenced me recently I would say Swimfan. I love the obsession quality in that movie and would be lying if I said I didn’t watch it as soon as I found out I booked Rebecca in The House Sitter.

TCS: As an actress, is there a specific role or type of character that you haven’t played yet but would really like to?

AD: This type of question is always really hard for me to pinpoint because with my career so far, I never saw the roles coming that I’ve been blessed enough to get the chance to play. Of course, as an actor you just always want to play something that connects with people, even if it’s just to make someone laugh for two seconds. So really all I can say is I hope to be given the opportunity to just create new characters whatever they may be.

TCS: What do you feel is the hardest part of getting into the mindset of a character?

I would say not having judgment on who you’re playing.

TCS: What different acting techniques are required when acting in drama and comedy? Which do you prefer?

AD: It’s always hard for me to pick my favorite because I love them both in different ways, but I love laughter and having the chance to make someone happy is such an amazing feeling, so I am going to have to go with comedy.

TCS: Can you share with us your most interesting set story?

AD: My most interesting set story would have to be my role on Justified. I loved the character of Caprice so much when I read for her, but she was only supposed to be on one episode. The amazing team at Justified allowed her to come back a few more times this last season and it was just such an amazing experience to see a character grow and not know where the writers were going to take her.

TCS: Describe for us how you created the 3Monkeys Theatre Company in Woodland Hills, California?

AD: 3Monkeys still holds a very special place in my heart. When I first moved out to LA I came in contact with a really amazing teacher who had a space and a small group of us sat down and found a play we wanted to do, so we created a company and made it happen. It was such a cool experience to be with something from the ground up and watch it take on a life of its own. I love theatre. I come from a background in it and it will always be my first home.

TCS: Can you tell us about any upcoming projects?

AD: My role on Workaholics starts airing this month. I will also be guest starring on an upcoming episode of Bones and later this summer will be on Stitchers on ABC Family.