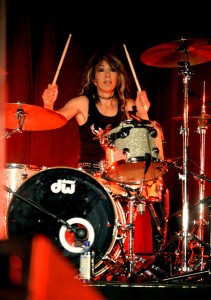 Roxy Dora Petrucci, the Michigan born native drummer, first burst onto the international music scene as a member of Madam X, a metal band that she co-founded with her vocalist sister, Maxine. Their 1984 release of We Reserve the Right album featured “High in High School,” an anthem that didn’t become a massive hit, but is still beloved by cultist hard rock and metal fans all these years later.

In 1986, Roxy finally found the commercial success she’d always desired. Singles like “Cryin’”, “Edge of a Broken Heart”, and “How Much Love” hit pay dirt on MTV plus rock and pop radio. Shortly thereafter, the all-female group embarked on worldwide tours with heavyweights such as KISS, Scorpions, Ozzy, Deep Purple, and Bon Jovi which helped solidify them as a premiere rock act to be taken seriously.

In late 1991, the undercurrents coming from the Seattle grunge scene helped strengthen the winds of change and underscored the decision to disband Vixen. At that time, each band member independently dabbled in various projects. Petrucci later returned to the band when they reunited in 1997 along with lead vocalist Gardner and newly added guitarist Gina Stile releasing “Tangerine” under the Vixen moniker.

In this edition of The Creative Spotlight, I had the pleasure of interviewing legendary female drummer Roxy Petrucci and asking her a few questions about her musical influences, her struggles as a female drummer in a male dominated music industry. her career in both Madam X and Vixen, and her short and long-term future plans.

The Creative Spotlight: At what age did you first realize that you wanted to be a musician and what was the first instrument and song you learned how to play?

Roxy Petrucci: I was about 10 years old when I picked up the Clarinet and immediately fell in love with the instrument. I have no clue what the first song I learned to play was, however, I eventually kicked ass playing the Clarinet Polka! Through school and into college music was my salvation. I was a good classical Clarinetist and I took it serious, it wasn’t just a hobby. Music is what I was meant to do and still to this day I have a passion for it. I still get a rush from the sound of my kick drums and snare ripping off your face!

TCS: What famous musical artists and/or bands were among your early influences and describe the impact they had on shaping your musical style?

RP: Fanny the all-female rock band, active in the early 1970s, had a huge influence on me. Back in those days you never saw women playing rock, it was mind blowing to watch them rockin’ out on TV.  Black Sabbath was my first ever live metal concert, their songs and live show hooked me and sealed my fate. From that day on I knew what I wanted to do. Led Zeppelin, Hendrix, Judas Priest, etc. I love metal, I love jazz, and I love 70s funk. Roll all that into my playing style.

TCS: For the benefit of those who may not be too familiar with Roxy Petrucci or your musical career, please describe for us how you started out and eventually ended up being the drummer in the all-female band Vixen?

RP: I toured with a metal band called Madam X before I joined Vixen. This band featured my sister Maxine on guitar. We signed a record deal with Jet/CBS and released one album. Janet Gardner had heard rumblings of Madam X breaking up and as soon as word got out she swooped in and scooped me up.  I joined Vixen shortly after and it was quite a culture shock. These girls had it together and I was pretty rough around the edges but quickly learned to fit in. Share was recruited by Jan shortly after I joined. Jan Kuehnemund (RIP) was a compassionate person, such a good soul. We miss her every day. In describing the members let me just say we’re close like sisters. We have our disagreements but at this stage of our lives we appreciate every show and thankful to have this opportunity to show the boys how it’s done!

TCS: Share with us some of the struggles you may have encountered as a female drummer in a male dominated music industry.

RP: It was such a different scene when we were in the trenches. We had to look good but play better.  I have to say that many of the guy bands were a lot prettier than us and not very talented but they got a pass. The girls and I were not intimated because we knew we had something special, we were motivated to make something happen. It only took a few shows in L.A. before word got out that Vixen was the real deal. Before long we had lines forming around the buildings waiting to see us. David Lee Roth, Quite Riot, and many other higher profile bands came out to our shows. What an after party!

TCS: After Vixen signed with EMI records in 1988 and released the debut self-titled album, were you surprised by the success you generated from the first single, penned by Richard Marx and Fee Waybill of The Tubes, and video for “Edge of a Broken Heart”?

RP: Richard saw us live and he was inspired to write “Edge of a Broken Heart” along with Fee Waybill. In my opinion it’s the song that defined our sound and put Vixen on the map.  It’s still a fan favorite and yes it was in Billboard’s Top 100 and the video was stellar! An MTV favorite! Yes I shot the entire video in stilettos.

TCS: Describe for us the meaning and background behind Vixen’s highest charting single on Billboard’s Top 100 at 22 as well as the making of music video for “Cryin’”?

RP: Jeff Paris had presented that song to us and again a no brainer. Great songs are great songs regardless of who writes them. We took that song and owned it. The video shoot was pretty grueling. Back then we shot all day and all night but the end results were pretty amazing.  The stage was something like 18′ high and scary as hell. My riser was another 3′ ft. high so I was up there.  I think the lyrics speak for themselves, “I won’t be Cryin, Cryin when I think about you cos I opened my eyes’. ‘Those days are gone.”

The video for another single “How Much Love” was also a marathon shoot. Check out the stage, pretty awesome, as was the male model!  Janet tore her leather pants during that shoot and I had insomnia for like a month. Ha, the strange things we remember.

TCS: During the 80s you literally rocked the globe so share with us some of the major recording artists that you toured with and describe for us which band had the most profound impact on your career?

RP: We toured with KISS, Scorpions, Ozzy, Deep Purple, and many more heavyweights. I think opening for the Scorpions had the biggest impact on me because it was our first arena show.  Looking out in the crowd of about 20,000 fans left me speechless, the feeling is indescribable. Richie Blackmore was a real prankster. He always had something up his sleeve for us and his bandmates. He superglued our dressing room door closed just before we were to go on stage and he lit off stink bombs. We had nowhere to go it was horrible. All the bands were pretty great to us and we had the time of our lives!

TCS: Is there a particular venue that you’ve always wanted to play? And, what other entertainer and/or entertainers would you most like to have play alongside you on that stage?

RP: I would love to play Australia! Any venue! All Rockers are welcome! Love The Winery Dogs!

TCS: What does the short and long-term future look like for Roxy Petrucci, Vixen, and Madam X?

RP: We’ve been working steady since 2014 honoring our bandmate and founder Jan Kuehnemund. We’re gonna keep rockin for our fans and ourselves because we are just having too much fun! I’m also recording a new record with Madam X so stay tuned, more coolness to come!

To stay connected with me, please join me on the following:

TCS: What specific advice would you give young female artists wanting to become singers, songwriters, guitarists, bassists, and/or performers?

RP: I have three strong pieces of advice to anyone just hoping for a shot at greatness with still no guarantees.